The Museum has acquired several important items over the past two years under this program, including a rare ceramic spoon from the personal dinner service of Quong Tart, the "Perseverance" wool wagon which carted Braidwood wool to coastal steamers in the 1890s, and a fine collection of Chinese blanc de chine libation dishes. The latest acquisition will be installed using display material donated by the National Museum of Australia in Canberra.

Shortly after gold was discovered near Major's Creek in 1851 a flood of prospectors arrived to stake their claims. The wealth generated on the goldfields also attracted people who were prepared to take enormous risks to steal the gold from miners both on the fields and en-route to bigger centres. An armed Gold Escort was established within a few years of the gold discoveries to protect the prospector's interests, and comprised a privately contracted carriage in which a gold bullion safe, a cash safe and a book with a register of the property on board were carried.

The escort was generally in the charge of a professional driver with an armed trooper beside him and two more on the back of the carriage. Four additional armed mounted troopers travelled ahead of and behind the vehicle. The gold safe and cash box were securely bolted to the floor of the carriage. In Braidwood, the escort would travel every week or so between Araluen, Major's Creek and Braidwood where it would meet the stage coach travelling to Goulburn or Queanbeyan, and these would also have been heavily armed. In March 1865, the bushranger Ben Hall and his gang rode to Braidwood and joined with notorious local Tom Clarke in holding up the gold escort as it travelled up the hill to Major's Creek carrying a large sum of gold belonging to the prosperous Araluen gold buyer Mr John Huxham Blatchford, who accompanied the coach. Four troopers defended the coach, and after a vicious fight managed to hold off the attackers, but one trooper, Constable Kelly, was injured.  Blatchford ran back to Araluen to sound the alarm and shortly after Inspector Orridge rode out from the temporary police barracks at Tidmarsh in Braidwood to assist. The bushrangers fled into the bush and escaped.

Many gold escort coaches were two wheeled vehicles but the Braidwood vehicle was required to pass up the treacherously steep track to Major's Creek, where a two wheeled cart would have been liable to tip up. The Braidwood coach has four heavy wheels and a lightweight dog-cart style body, making it fast and stable, and the  bullion safe was concealed in the back compartment.

This vehicle is believed to have been used in Braidwood from the early 1850s to the 1880s,  in the ownership of Mr Blatchford who was a major gold buyer with concerns in the Araluen fields.  After the Gold Rush it went to Goulburn where it was used as a light delivery vehicle for about 50 years, finally being purchased in 1965 for an historical collection in rural NSW. It is in remarkably original order despite some minor modifications.

The carriage was built by W & A Flandrau in New York, highly prestigious coachbuilders who listed among their clients the White House and many of the country's most affluent families. The Flandrau coachbuilding family operated together, and then as three separate businesses, between the 1830s and the 1880s. Flandrau were particularly famous for their excellent high speed dog carts. This particular carriage would have been ordered specially by Mr Blatchford and has the unusual features of heavy wheels, a ledger compartment and securing holes for the bullion safe.

Conservation and restoration work was completed by Antony Davies at Jembaicumbene, who drove the carriage in the 2009 Braidwood Festival Parade together with a mounted escort of 19th century troopers. It was then formally handed over to the Museum and installed in our new downstairs Gold Rush display. 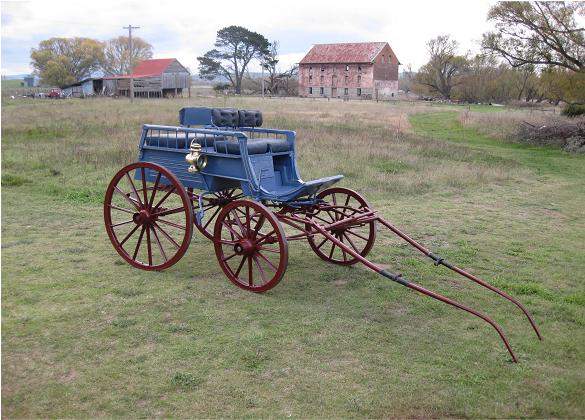 The coach has been restored to its original working condition and the finished coach will be presented to the Museum under the Federal Government's Cultural Gifts Program, of which the Braidwood Museum is an approved recipient. The program encourages gifts of cultural or historical significance to be donated to collecting institutions in circumstances where they might otherwise be effectively lost in the general open market.

The Braidwood Museum has completed the conservation of an extraordinary gift, announced last June. The Major's Creek gold exploration company Cortona Resources acquired the horse drawn Gold Escort coach which is believed to have been used to transfer gold and cash between Araluen, Major's Creek and Braidwood between about 1865 and 1885, and has generously gifted it to the Braidwood Museum where it will become a central part of our new exhibits.